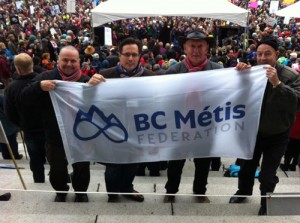 (Victoria, BC) On Monday, October 22nd the BC Métis Federation was part of history with the rally and protest on the BC legislature against further pipeline development and increased tanker traffic on the coast. These issues are significantly increasing in light of the proposed Enbridge Northern Gateway Pipelines Project and proposed Kinder Morgan Canada expansion of their TransMountain Pipeline. There were roughly 5000 people on the lawn of the legislature representing several First Nations, labour unions, Provincial NDP, Federal Green Party, Teachers Federation, Canadian Autoworkers, Communication Workers of Canada, Nurses Union, and several other concerned British Columbians.

The BC Métis Federation leadership took part in a historic gathering of many Aboriginal Nations from BC who gathered prior to the 11:00 AM official protest. Métis leadership was asked to speak along with various Nations including the Carrier, Tshimshian, Nuchalnuth, Heiltsuk, plus many others. It was a historic gathering where the Nations symbolically initiated the protest with an entry of Nations and the BC Métis Federation was proud to ensure the majority voice of opposition against projects such as proposed Enbridge Northern Gateway Pipelines was known to all.

BC Métis Federation President Henry stated, “As the President I began by apologizing to the First Nations Chief and elders for the lack of respect some of our Mètis people have shown in BC in light of the perceived support by organizations such as the MNBC who have since admitted to signing and supporting the proposed Enbridge Northern Gateway Pipelines Project despite strong First Nations opposition. The large majority of the First Nations who are directly impacted are absolutely opposed to these types of developments that threaten their cultural and traditional way of life and it is truly a public embarrassment to divide our Mètis people the way MNBC has done on this project and pit us against First Nations.”

BC Métis Federation President Henry concluded, “I was especially proud to be Métis today with our team from the BC Métis Federation as we showed our strength and resolve. We stood with 5000 other people who are all adamantly against tar sands expansion and increased tanker traffic which will be the result if these projects move forward. Make no mistake that projects such the proposed Enbridge Northern Gateway Pipelines Project are far from approved and do not be misled by foolish and uninformed leaders who are trying to justify support with excuses that they could not stop the project. The majority of Métis people in BC do not support these projects and we will be sure to stand up and fight for our majority voice.”
For more information about the BC Mètis Federation please review our website www.bcmetis.com.

You can follow BC Métis Federation President Keith Henry on twitter @keithhenryMetis
[ilink url=”/wp-content/uploads/BCMF-Press-Release-October-22nd-2012-Proposed-Pipelines-Get-Plugged.pdf” style=”download”]Download this Letter in PDF [/ilink]

Who are the Métis?

The Métis are a distinct people, though it can be complicated to define Métis Identity. Learn more about what it means to be Métis here.

Signup to receive updates by email

There are several counselling resources available for anyone needing support. 24 hours a day, 7 days a week.